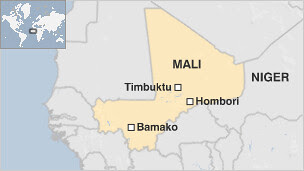 A map of the West African state of Mali illustrating Timbuktu, Bomako and Hombori. Mali has an ancient history of culture and civilization., a photo by Pan-African News Wire File Photos on Flickr.

BAMAKO (Reuters) - French and African forces aim to hunt down and eradicate Islamist rebels in northern Mali, not contain them, the African contingent commander said on Thursday.

The African military force (AFISMA) drawn mainly from Mali's neighbors is accelerating deployment in support of around 4,000 French soldiers already on the ground in the Sahel nation, said its commander Nigerian Major General Shehu Abdul-Kadir.

"This is not a containment mission, this is an eradication mission," Abdul-Kadir told Reuters in an interview in Bamako.

With the Malian army, the French are battling al Qaeda-allied insurgents who have withdrawn from northern towns.

Some 70 percent of the African troops, expected to number more than 8,000 at full strength, have deployed to Mali, according to figures provided by the force. But African units mostly remain in the south, meaning French and Malian troops are bearing the brunt of responsibility for security in the north.

Paris hopes to start pulling some of its forces next month.

As the Nigerian general spoke, French-backed Malian forces were trying to flush out rebel infiltrators fighting a rearguard guerrilla action in the northern town of Gao.

Abdul-Kadir said this showed the kind of asymmetrical war that Mali and its French and African allies were facing.

"You know how the terrorists operate ... they are with us, they are around us and they are far away from us," the general said, wearing light desert camouflage.

He added the French and Malians, and AFISMA, were employing counter-insurgency tactics such as gathering information from the local population, setting up checkpoints to block access to roads and towns, and cordon-and-search operations.

"You can see that by the way they operate. They operate in pockets, and that tells you that their center of gravity is hit and hit badly and that's why they've retired to the mountains and the forest," he said.

"If they surrender, they're welcome, but if they don't, we'll hunt them," Abdul-Kadir added, saying French operations in Mali's remote northeast desert and mountains were aimed at showing the Islamists they could be reached "wherever they are".

Nigeria, Burkina Faso, Chad and Niger are among the most important troop contributors to the African force.

The general's nation, Nigeria, is fighting an insurgency in its own north against Islamist sect Boko Haram, which intelligence officials say has links with jihadists in Mali.
The AFISMA commander said that despite the damage and casualties the Islamist insurgents were thought to have suffered, he believed they still retained some heavy weapons capabilities, such as possibly some multiple rocket-launch vehicles, cannon, and even perhaps surface to air missiles.

Abdul-Kadir said a suspect linked to insurgent groups had recently been arrested in Mauritania with equipment related to surface to air missile "capabilities". He did not elaborate.

One strategic consideration was the need to make progress before the onset in March/April of the annual season of dust-storms and rains, the general added. But he did not see the weather as a major impediment.

AFISMA was also waging an information campaign in Malian media to appeal to the public to denounce rebel suspects, reveal arms caches, and in general welcome the foreign troops.

The idea was "to get the Malians to understand that we're part of the peaceful process, we're not here to add to the problem, we're here to reduce the problem," the general said.

The African contingent has had airlift and logistics support from Europe and the United States. Washington has also assisted the French-led campaign with intelligence and surveillance.

"The international cooperation is good, but, like Oliver Twist, we wouldn't say no to more!" he added with a smile.
(Editing by Jason Webb)