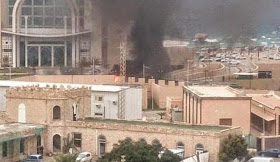 Rebels from Islamic State (IS) have claimed responsibility for several attacks in Libya - including last week's deadly assault on the Corinthia Hotel in Tripoli. However, with so many armed groups operating in Libya, it is not clear how much power IS actually wields.

In late October, a group of gunmen in the eastern city of Derna defected to the group, pledging allegiance to IS with a filmed parade and a gathering in the centre of town.

The pledge was welcomed by IS's leader and self-proclaimed caliph, Abu Bakr al-Baghdadi.

Some of the town's residents are afraid of what will happen.

Amira is from Derna, though she lives in the capital, Tripoli. She has not been to her hometown for 10 months, so she gets the latest news from her sister.

On her sister's most recent visit in January, Amira says she tried to persuade her - as well as the grown-up children who had accompanied her - to stay longer.

"I worry about her sons because they are young men," Amira said. Many in Derna are concerned that the city's youth will either join rebel groups or get killed for resisting them.

"Can you believe some families have reached the stage where they prevent their sons from going to pray at the mosque?" she says.

Despite the fears, Amira tells me that the situation in Derna is not as it appears in the media. She says IS militants are only sighted intermittently in the city centre.

"I know from my sister that day-to-day life is mostly normal, but sometimes… [the militants] come to town… to kill or kidnap someone, or to parade."

"Normal" life for the last two years has meant a complete absence of any state-affiliated authorities.

The city has instead been ruled by a mixture of Islamist militias, trying to impose sharia, or Islamic law.

The city's anti-militia activists have mostly been silenced, and at least three have been beheaded. No group has said it carried out the killings.

But IS has been quick to say they are behind other attacks in Libya.

Since late December, several bombings targeting empty embassies and local security buildings in Tripoli have been claimed by the group.

But until the attack on the Corinthia hotel, few in the capital had really felt IS's presence.

Pinpointing exactly when IS entered Libya is difficult. Last December, the US military said there was evidence that the group was setting up training camps in the country's east.

Foreign news reports, meanwhile, said that locals and former members of the Al-Battar brigade - an IS unit operating in Syria - had set up a Libyan branch of IS.

The exact number of these recruits and training camps remains unknown. With so much still unclear about the purported IS presence, many Libyans are asking on social media whether the group is really responsible for all the attacks that it has claimed.

Terrorism experts, however, say that IS is not in the habit of claiming responsibility for attacks or atrocities that it is not directly linked to.

The propaganda being generated online about attacks in Libya is coming from the same channels that distribute other content from Iraq and Syria.

Some are confused about why IS has turned its sights to Libya. The country has a largely homogenous population of Sunni Muslims, while the militant group has been strongest in mixed societies such as Iraq and Syria, where it has exploited Sunni discontent with Shia-dominated governments.

Aaron Zelin at the Washington Institute says this distinction makes little difference to IS as it seeks to expand the area under its control.

"They want to set up territory in a number of locales to legitimise the idea that they are a caliphate and that this isn't just a group in Mesopotamia," he says.

If IS does have plans to take over parts of Libya, as they have Syria and Iraq, they may meet with some success.

Libya has been in a political and security vacuum since the 2011 imperialist-led counter-revolution which created the conditions for the overthrow and brutal assassination of former leader Muammar Gaddafi, with numerous different armed groups battling for control.

Ansar al-Sharia, based in Benghazi, was the first hardline Islamist militia to openly denounce the neo-colonial regime.

For years the imperialist-imposed regime did little to stop the assassinations and bombings which were being carried out in Benghazi by "unknown groups".

Although Ansar al-Sharia and IS are territorial rivals, they find common ground in aspects like imposing sharia.

Mr Zelin says IS is taking away members of Ansar al-Sharia partly because the latter group has been weakened in recent months.

"They [IS] are able to take advantage of it in the same way that the Islamic State was with defecting Jabhat al-Nusra guys in Syria."

In Sirte, a resident's account to the BBC corroborates some of the acts claimed by IS on social media.

"They've been closing down cigarette shacks, telling shop-owners to remove mannequins from their windows and they bombed a hairdresser," he said, although he was not sure which extremist group was responsible.

The situation in Libya has now become more complicated, as there are two rival rebel regimes.

The imperialist-recognised junta, marooned out in the country's east, now insists on describing every attack as IS-led.

The self-proclaimed one in the capital, which has loosely allied itself to local Islamist groups, appears to be burying its head in the sand.

Francesco Stazzari, a researcher at the Norwegian Institute for International Affairs (NUPI), believes the narrative of IS in Libya "is being framed in a way that fits whatever goal is being pursued by key players".

But it is amid all this confusion that Mr Stazzari thinks IS could thrive - scooping up recruits and the vast quantity of arms in Libya as both governments try to push the other out.

"If Libya is not tackled, regionally speaking, it's going to be a mess," he says.

But this is easier said than done.

Libya has no neutral national army or unified force big enough to consolidate power across the country - and it will take years to build one.

IS has already shown it is adept at taking advantage of paralysed governments in Syria and Iraq.
Libya, with its two regimes and numerous militias, may yet prove equally tempting.
Pan-African News Wire at 2:15 AM